I ran two miles with Roary this afternoon. It was so nice to get outside and exercise after an 8 hour work day. If you asked me a few years back how my run went I definitely would have grumbled and walked away with tears in my eyes.

I grew up playing sports, mostly volleyball. I was one of the best players on the team but I was ALWAYS the slowest sprinter/runner. For years on end I hated running with a passion. First off, I sucked at it! As a competitive athlete I hated being crappy at something.  Also, it was too tiring and too painful – my asthma would act up and I’d burst into hyperventilating tears. <- one of these incidents happened during a run with my husband when we first started dating, HA. He’s a keeper.

My main issue with running was that I could hear my labored breathing all the time. Hearing my breathing would make me anxious and want to stop. To ‘fix’ the problem I would blast my iPod so loud that I couldn’t hear anything at all. This still didn’t make running enjoyable, I just kept obsessing over how stinking long ‘Irreplaceable’ by Beyoncé was!

A change in my approach to running happened when my husband was deployed around this time last year and I was stuck walking the hyper dog 3 times a day. I decided to ditch the iPod, run a shorter distance, and fix my heel-banging stride. For six months, Monday through Friday, I took in the night sky (I woke up at 4:45am for my commute) and ran more on my toes at a nice, relaxing pace. I loved it! I added daytime runs on the weekends and enjoyed the sunrise (you can’t expect me to sleep in way later on the weekend when I get up so early during the weekday!). Roary and I even did sprints once in a while because it was fun! 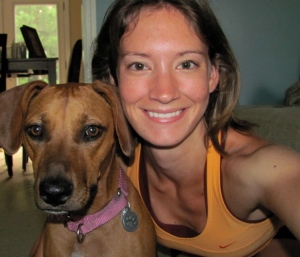 roary dazed after a summer run

I ran my first 5k in December and my second on January 1st. Training for the 10k starts in a couple weeks! I’m so excited for the challenge and have high hopes for the Marine Corps marathon in the fall. Yikes!

I still find it crazy that I now enjoy something that I used to despise so so much. I guess the point of this post is if you think you hate something maybe you should try a different approach? You may be in for a pleasant surprise.